Semuliki National park was established in 1993 at an area of 220 km2 in the western Uganda, Bwamba county, Bundibugyo district. The park overlooks the Rwenzori mountain ranges and stretches along the famous Semuliki valley and is its one of the newly established national parks in Uganda. Most of Semuliki National Park is covered by the Ituri forest which is among the diverse forests on the African continent the park features Semuliki river which is said to have originated from the Congo River and it drains into Lake Albert.

Semuliki national park is a home to at least 441 species of birds and 53 species of mammals. Initially, the Batwa group of people also lived in Semuliki forest which stretches to the Ituri forest of Congo. Also, to mention about Semuliki National Park is the Sempaya hot springs which are said to be the remnants of the old volcanic processes.

How to get to Semuliki National Park

From Kampala, Semuliki National Park is located 352km which is approximately 7-8hours drive through Mubende and Fort portal route and 510km through Mbarara and Kasese. It also rewards with the opportunity to encounter the Rwenzori mountains, Kyambura wildlife reserve, Queen Elizabeth National park and lake Mburo National park respectively.

Aero link is a domestic airline and it operates scheduled flights from Kajjansi airstrip or Entebbe Airport to the airstrip near Semuliki National Park where visitors can easily connect to the park.

Other charter flights are also available to serve you. Please contact your tour operator in Uganda to help you do your safari in Uganda effectively. 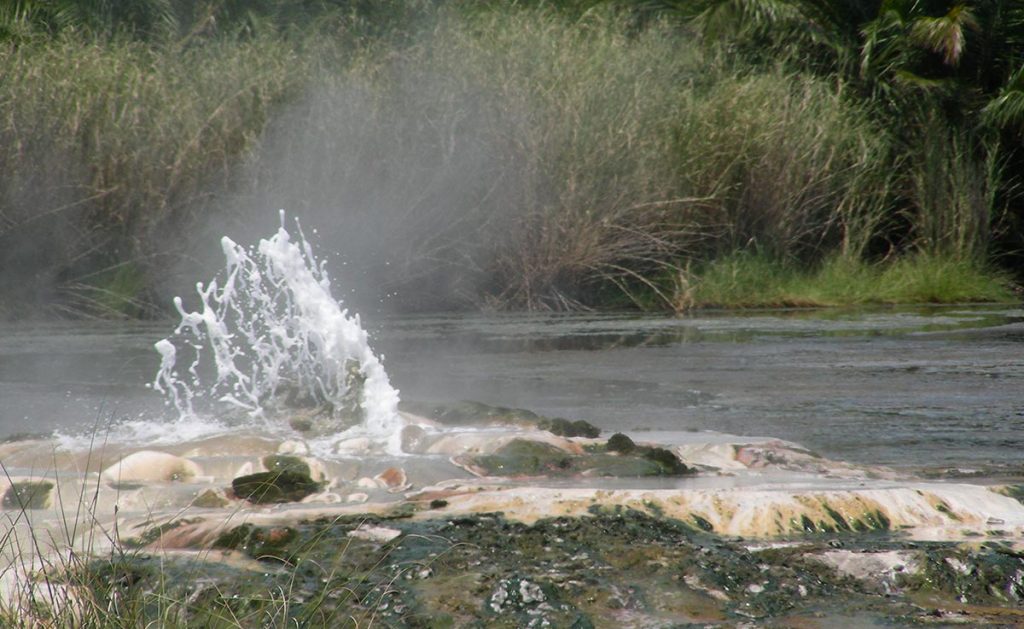 The Sempaya Hot Springs are the flag ship attractions in Semuliki National park there are two hot springs in Semuliki positioned in the south of the park in a lowland swampy area. The male hot spring is called Bitente and is positioned approximately 30 minutes’ walk from the Sempaya park headquarters.  It stretches for over 12m in diameter.  The female hot spring Nyansimbi is also close to park headquarters and is marked by boiling geyser spurring up to 2m in height visible with in 2km distance and boiling to 100 degrees Celsius. The hot springs had a rich historical significance to the local people as they were used as healing grounds for a range of skin diseases and fungal infections.

Semuliki National Park is surrounded by a range of tribal groups that count to four. These include the Bakonzo, Bamba, Basongora and the Batwa. The Bakonzo and Bamba are cultivators who till the slopes of Mount Rwenzori while the Basongora are cattle keepers who thrive in the open plains of the rift valley while the Batwa are forest people who lived a hunter gather culture before they were evicted from the forest during its establishment as a national park.  These people have got diverse traditions that are worth encountering while on safaris in Uganda. 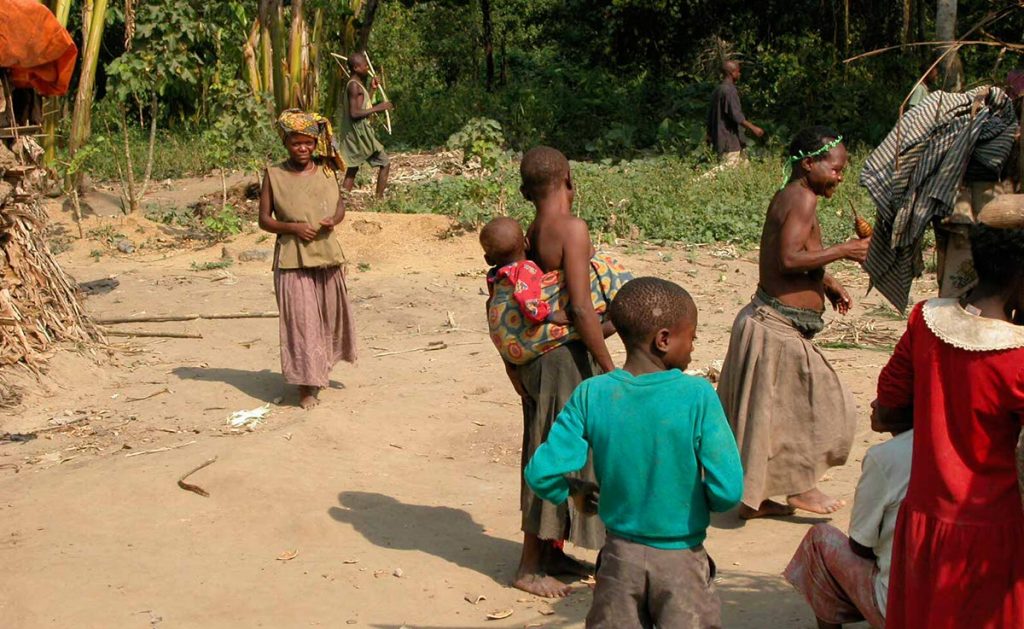 Semuliki National park is one of the mature forests of Uganda and its forest landscapes provide a ground for several birds. No wonder the park has 441 bird species of which 23 are endemic to the Albertine rift forming about 90% of Albertine endemics. These birds include among others; Short-tailed Warbler and Blue-headed Sunbird as well as seven IUCN red data listed species. The common ones include; Common Bulbul, the African Emerald Cuckoo, Red-headed Bluebill and African Blue and White-tailed Blue Flycatchers.

Semuliki National Park comprises of lowland tropical rain forest categorized as moist deciduous. It has 336 tree species among which are restricted to Semuliki forest and few other neighboring forests such as Lovoa swynnertonii and Cordia millenii which are recorded as endangered in the Semuliki National Park. The center of the park is dominated by Cynometra trees while the forest edges are dotted by the riverine swamp forests along the Semuliki River and a range of magnificent species of trees around Sempaya.

Semuliki National Park contains 53 mammal species of which 27 are large mammals. The Park has 11 wildlife species that are endemic to it including; pygmy antelope and 2 species of the flying squirrel. Other wildlife species in the park include; forest elephants, forest buffalo crocodiles and hippos found in the Semuliki River, water chevrotain, also referred to as the “fanged deer” and the blue duiker. Semuliki forest is also marked by a range of primates including; grey-cheeked Mangabey, baboon, Chimpanzees, Dent Mona monkeys, central African red Colobus, black-and-white Colobus, and vervet monkeys. Nocturnal primates also exist including; Bush babies and Pottos.

Wild game in Semuliki National Park can be explored on game drives. The park has three tracks that are designed to enable Uganda safari undertakers to enjoy the wild game viewing. The tracks extend to Toro Semuliki Wildlife Reserve offering opportunities to encounter larger savannah and smaller forest elephants, waterbuck, buffaloes, crocodile, Uganda Kob and warthog.  The Pygmy hippopotami, bush babies and leopards can be seen though on rare occasions. The game drives in Semuliki can be conducted in the morning, evening and at night to spot nocturnal like white-tailed mongoose.

The Semuliki National Park also offers good birdin opportunites. With 350 bird species of which 23 are endemic to the Albertine rift forming about 90% of Albertine endemics, the Ntandi and Sempaya tracts of Semuliki offers ideal bird encounters while on safari in Uganda.  Some of the bird species that can encountered include among others; White crested horn bill, Yellow- throated Nicator, Piping Hornbill, Great blue and Ross’s Turacos, among others. The Kirimia River area is another favorite spot where birds can be encountered. The stretch to the shores of Lake Albert offers opportunity to encounter shoebill stork. 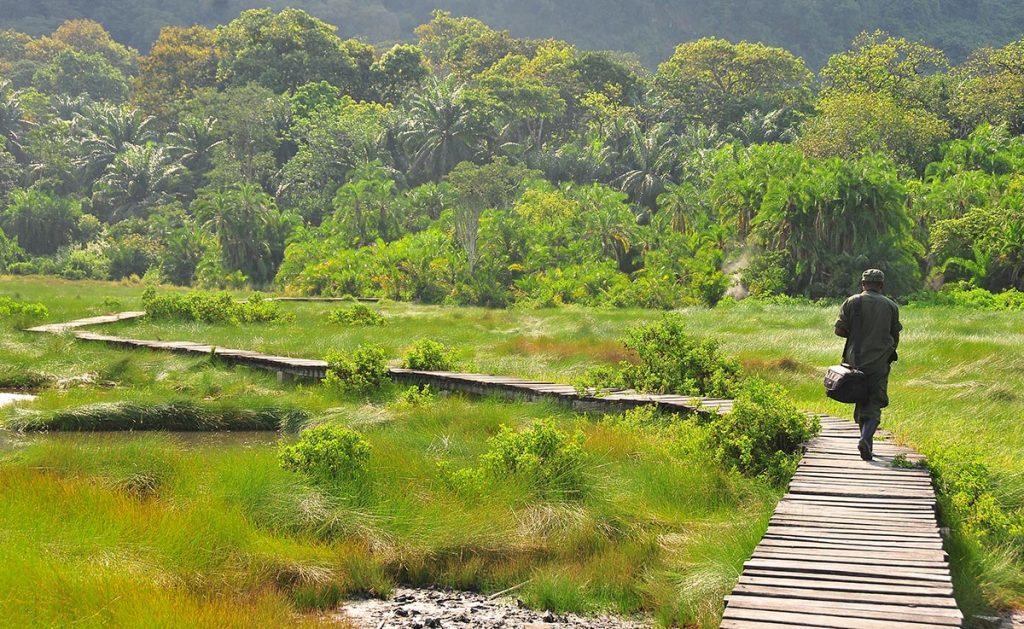 Semuliki National park can also be explored on foot. The trails include; 13km Kirimia trail which traverses the forest to River Semuliki lasting for 8 hours commencing at 8am. Another one is the 11km Red Monkey Track which traverses the park’s eastern border with chances of encountering the rare deBrazza’s monkey up to Semuliki River. The 8km Sempaya Nature Trail exposes you to the hot springs and counts of primates. This trail allows you to enjoy the hot springs, boil some plantains or eggs. The encounter takes 2 – 4 hours ideally in the morning and in the afternoon.

The cultural encounters take you to the adjacent local communities most especially the Batwa forest people who initially occupied the forest and now were resettled on the forest margin at Ntandi. You encounter their traditions, listen to their stories and attend to their musical performances. 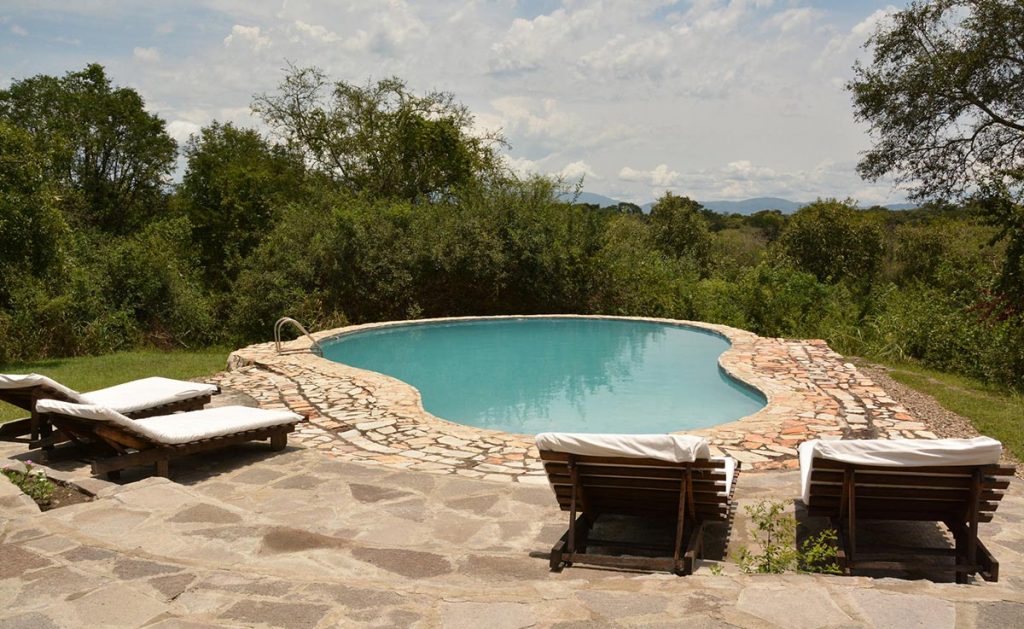 Located in the village of Kirimia, 100m from the trailhead of Kirimia and 10km from Sempaya towards Bundibugyo provide overnight stay with meals.

The park provides a campsite with basic cottages at Bumaga, over 2.5 km from Sempaya. The meals are arranged on order. Catering amenities exist for hire.

It has eight luxury, en-suite tented rooms with a maximum capacity of 18 people. Each has a fireplace, private bathroom and hot water with a magnificent pool area where guests can relax between and after activities. Staying under canvas is one of the most romantic and exciting things to do on safari in Uganda.  Tents are protected by a thick thatch roof and feature en-suite bathrooms with hot showers running water and toilets that flush. The morning cup of coffee or tea is drawn closer to your room to enjoy while lying on your bed or sit on your veranda and drink in the view before the day begins.