Rwenzori Mountains National Park also known as the mountains of the moon as described in 150AD by Ptolemy a Greek geographer and also proclaimed by many as remarkable snow-capped mountains. This was also confirmed by henry Morton Stanley who affirmed the ancient proclamation in 1889 when he visited Uganda and went to the Rwenzori mountains.

The Rwenzoris are indeed a historical land mark that no one should ever miss to experience while on a Uganda safari. Margarita is Rwenzori’s highest peak at 5109m above sea level and it is ranked as the third highest peak after Mount Kilimanjaro and Mount Kenya.

Despite being close to the lake, Rwenzori Mountains are covered by snow structured in form of ranges which pose a quite challenging experience to climb. These glacier mountains also led to the formation of river Nyamwamba. Rwenzori national park is home to at least 217 species of birds of which 19 species are only found in the Albertine rift and the vegetation ranges of the park is very impressive. Apart from Margarita peak, Rwenzori Mountains national park features other peaks like Mt Baker (4,843m), Mt Emin (4,798m), Mt Speke (4,890m), Mt Luigi di Savoia (4,627m) and Mt Gessi (4,715m). Mount Rwenzori is surrounded by communities like the Bamba, Bakonzo whose lifestyle is adapted to the mountainous ecosystem. 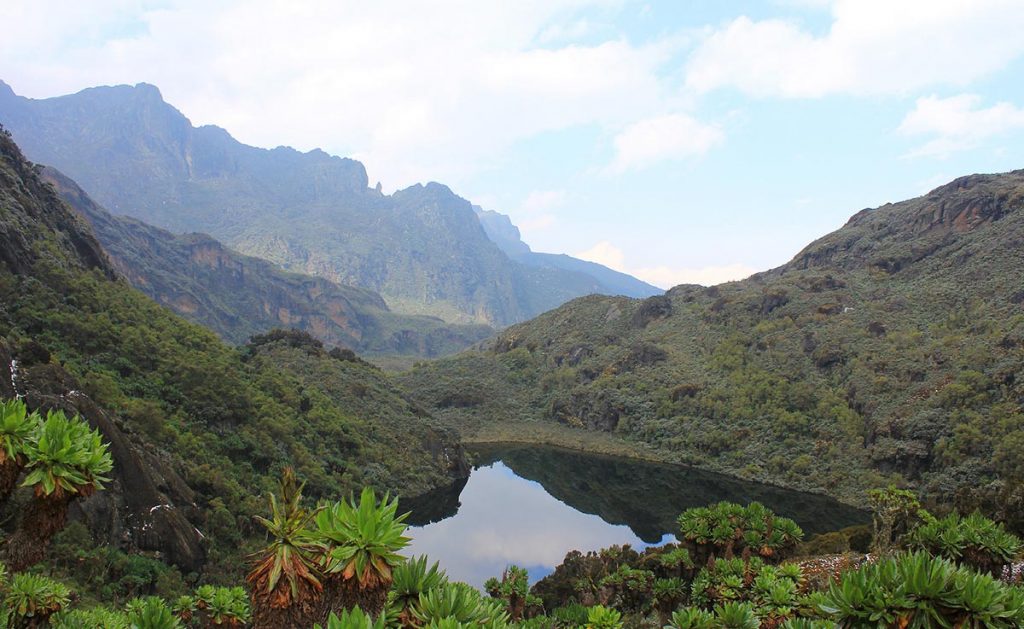 How to get to Mount Rwenzori Mountains

From Kampala, Mount Rwenzori National Park is located 440km which is a bout 7hours drive in western direction of Uganda.

Kasese is the neighboring town with just 25km (1hour drive) to reach the park. Fort portal town is also nearby with about 118km (3hours drive) and from Queen Elizabeth National Park, Rwenzori national park is just 72km away.

Connection to the park is easy from Kasese Airstrip where Aero link operates scheduled flights to from Entebbe International Airport. Arrangements for other charter flights can also be made. 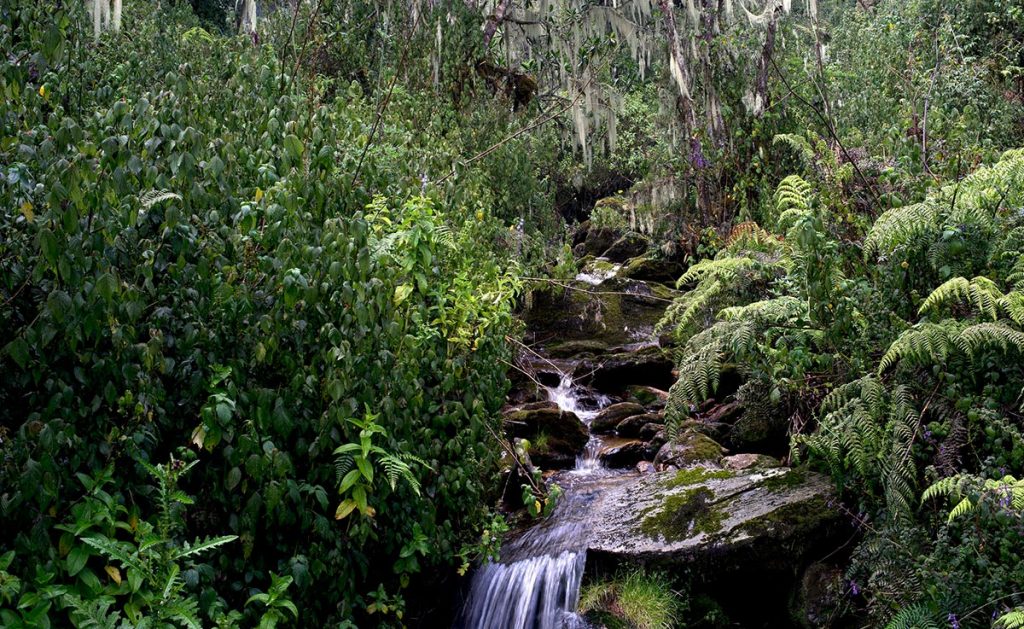 Mountain Rwenzori rises up to 5109m above seas level which makes it Africa’s 3rd highest mountain after Mount Kenya (5,199m) and Mount Kilimanjaro (5,895m) the Mountain has a range of sic peaks that are available for visitors to explore on a safari in Uganda and these peaks include; Mt Stanley (5,109m), Mt Baker (4,843m), Mt Gessi (4,715m), Mt Speke (4,890m), Mt Emin (4,798m) and Mt Luigi di Savoia (4,627m). the slopes of the mountains have magnificent glacier rivers originating from the snow scenic encounter that can be observed by visitors on a safari in Uganda. For example, River Nyamwamba.

One of the features that have made this park famous is its vegetation with various altitudinal ranges each with unique vegetation which make this national park a must visit while on a Uganda safari. This mountain park features montane forests, garishly colored mosses and drab beards of lichen, everlasting flowers, among others.

RWenzori Mountains N.P has some species of wildlife that also thrive in this park and they include; Elephant, giant forest hog, buffalo, bushbuck, leopard and chimpanzee among others. However, they are hard to spot. Other primates include hyrax and black and white colobus and blue monkey.

For the past thousands of years, the Bamba and Bakonzo have lived on the slopes of tMountain Rwenzori which they consider as a center for worship and a sacred landscape. Kitathamba the god of the Bakonzo and bamba is believed to be living in the higher slopes of the Rwenzori mountains within the snow and the glaciers while their god`s wife thrives in the lower moorland. The “Omusinga” king of the Bakonzo receives powers directly from the Kitathamba. The Bakonzo conduct prayer sacrifices on sacred grounds for forest productivity, good harvests, peace and aversion of natural calamities.

At least 217 species of birds can be spotted in Mount Rwenzori National Park of which 19 species are restricted in the Albertine rift. Birders on a Uganda birding safari have the opportunity to explore bird species that are rare especially in the lowland areas including the Rwenzori Turaco, Barbets, Robins, long-eared owl Bee-eaters, and sunbirds while the birds that exists in the higher slopes include; Swifts and Black eagles and while Bearded Vultures. In the upper alpine zones, birders can see the Malachite Sunbird. 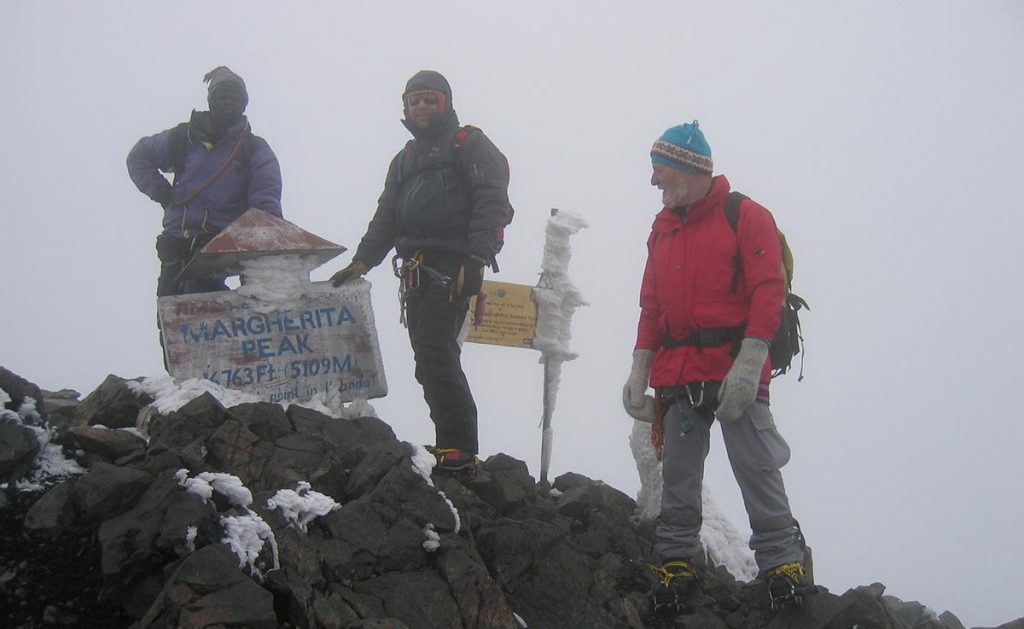 Climbing up to the top of Rwenzori Mountain is a possible using two trails namely; the Kirembe trail and the central circuit.

The central circuit takes about 7 Days for a round trip starting from Mihunga and can be climbed as follows. 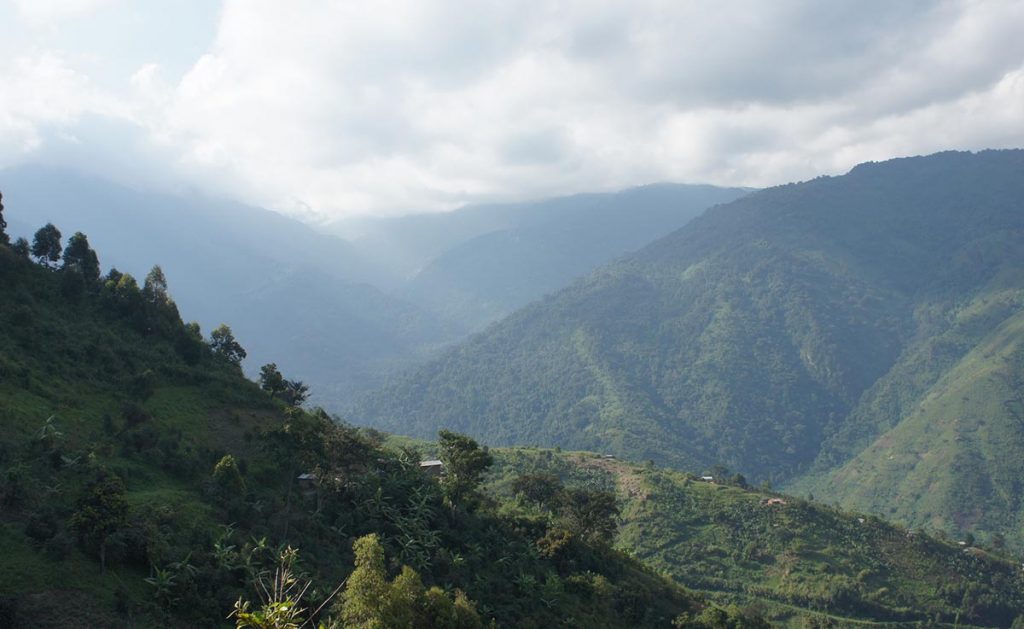 There are various train in Mount Rwenzori National Park that have been developed to explore the traditions of the tribal groups in the area particularly the Bakonzo and Bamba. Some of these trails include;

This is a local area occupied by the Bakonzo who have lived here for over 2,000 years and they have a very rich tradition and interesting lifestyle that visitors can experience while on a Uganda safari. Learn the daily activities of the local people like food preparation, animal rearing, crop cultivation and other local encounters like the traditional healer, story tellers, blacksmith and craft makers.

Other local community trails where visitors can explore the local tradition of the area include the Rwenzori Turaco View Camp Site, Bulemba-Ihandiro Cultural Trail.

Accommodation in and around Rwenzori National Park

Some of the accommodation facilities in and around Mt Rwenzori National Park include; Ruboni Community Camp, Ruboni Turaco View Camp, GeoLodges Equator Snow, Rwenzori Mountains / Mihunga Safari Lodge, Trekkers Hostel. Among others that can be arranged in Kasese-the nearest town.